Paving the Way For Reagan: The Influence of Conservative Media On US Foreign Policy 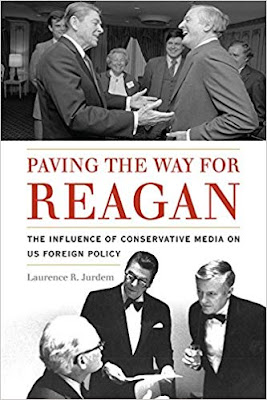 Aram Bakshian Jr offers a review of  Laurence R. Jurdem’s Paving the Way for Reagan for the Washington Times.

Political popularity is mostly written in sand. As personal auras fade, solid accomplishments count for more and tabloid charisma for less. Consider the cases of Dwight Eisenhower and John F. Kennedy. The only Americans alive today who could have voted for Ike when he ran for re-election in 1956 are in their early 80s or older. Anyone old enough to have voted for JFK in 1960 would now be 79 or older.

As long as living memory of Mr. Kennedy — the handsome, youthful president with a glamorous wife, an adoring press corps and a tragic, premature death — abided, JFK ranked high with the public, journalists and historians. This despite the scanty achievements and very mixed results of his aborted presidency.

In recent years, however, as the celebrity glow has dimmed, Mr. Kennedy’s stock has fallen. Meanwhile, Dwight Eisenhower’s standing as the brilliant World War II commander of the largest allied military effort in history and a first executive who kept America safe, prosperous, at peace and respected has steadily risen.

The Johnson and Nixon presidencies are mostly viewed as dynamic but flawed, Jimmy Carter as an embarrassing if well-intended accident. Both Bushes are widely perceived as personally upright leaders of limited vision, Bill Clinton as a clever but amoral Bubba. Barack Obama is already more remembered for breaking the color barrier on his way to the White House than for anything he accomplished after he got there. The jury is still out on the rather surreal current occupant. Donald Trump is very much a frenetic work in progress.

Which leaves us with Ronald Reagan, whose eight years in office marked the restoration of American prestige and self-confidence, not to mention the peaceful implosion of the Evil Empire. What made the Reagan presidency the success that it was?

From 1981 through 1983 I had the chance to observe the man at close quarters as his director of presidential speechwriting. To my mind Ronald Reagan had three great strengths: He was committed to a solid set of moral beliefs and principles; he was a man of character who always put his duty before personal popularity or political expediency; and he was one of those rare, rather fortunate souls whose inner qualities shine on the outside.

People saw and sensed that he was a good man who could be trusted. Ronald Reagan was everybody’s ideal grandfather, a patriarch both warm and wise.

Now independent scholar Louis R. Jurdem has produced a book that goes a long way to explaining how a man who began his adult life as a New Deal Democrat, gradually evolved — through a process of independent thinking and lots of outside reading — a humane, conservative world view. Mr. Jurdem does this by focusing on the leading roles of three small but influential publications that helped to shape and articulate Ronald Reagan’s own intuitive and practical grasp of conservatism: National Review, Human Events and Commentary.