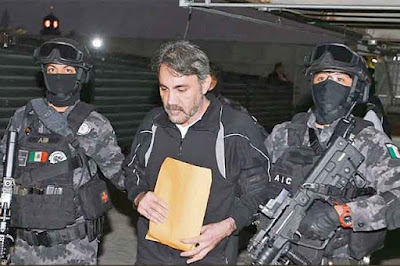 Lopez Nuñez, 52, arrived in the United States this afternoon and will make an initial appearance on Monday, July 9, before U.S. Magistrate Michael S. Nachmanoff in federal court in Alexandria, Virginia.  The case is assigned to U.S. District Judge T.S. Ellis III.

Lopez Nuñez is charged in a one-count indictment alleging that between 2003 and December 2016, Lopez Nuñez conspired with others to distribute significant quantities of narcotics for illegal importation into the United States.

“Until his capture, Damaso Lopez Nuñez allegedly participated in a multi-year conspiracy to distribute large amounts of cocaine, intending that the drugs be imported to the United States,” said Acting Assistant Attorney General Cronan.  “Lopez Nuñez’s arrest and extradition demonstrates the commitment of the United States and our partners in Mexico to the pursuit of drug traffickers who seek to flood our streets with addictive and deadly poisons, for their own illicit gain.”

“This successful extradition of a high-level target is a reflection of years of collaboration and cooperation by multiple Department of Justice units and our law enforcement partners who are all committed to combatting transnational criminal organizations,” said U.S. Attorney Terwilliger.  “With thanks to the authorities in Mexico for their efforts in facilitating this extradition so the defendant can be held accountable and face justice for his alleged crimes.”

The case was investigated by the FBI and the DEA, in cooperation with Mexican and Colombian law enforcement authorities.  Substantial assistance was provided by the U.S. Attorney’s Office in the Southern District of California.  The Department of Justice’s Office of International Affairs provided significant assistance in bringing Lopez Nuñez to the United States.  The U.S. Marshals Service provided critical assistance in the location and capture of Lopez Nuñez and assisted in the extradition.

The U.S. Department of Justice thanks the Government of Mexico for its assistance in this case.

This case is also the result of the ongoing efforts by the Organized Crime Drug Enforcement Task Forces (OCDETF), a partnership that brings together the combined expertise and unique abilities of federal, state, and local enforcement agencies.  The principal mission of the OCDETF program is to identify, disrupt, dismantle and prosecute high-level members of drug trafficking, weapons trafficking, and money laundering organizations and enterprises.