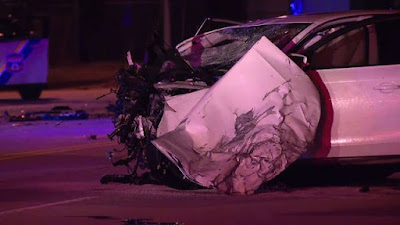 Jeff Cole at Fox 29 in Philadelphia reports that the driver who killed three people and injured one is being charged with homicide.


SOUTH PHILADELPHIA (WTXF) - The driver involved in a crash that left three people dead and another critically injured in South Philadelphia on Wednesday is now facing charges.


Keith Campbell, 29, has been charged with three counts of homicide by vehicle along with other related charges. Sources tell FOX 29’s Jeff Cole more charges could be filed.


FOX 29 has learned the police force of tiny Newport, Delaware—South of Wilmington—is investigating the events leading up to the fatal crash. Delaware State Police tell FOX 29 it “assisted Newport with an attempted vehicle stop” in the hours before the collision.


State Police directed FOX 29 to Newport police where Corporal John Mitchell said there is “an on-going investigation” and it is working with Philadelphia police accident investigators on the case.


"There was no one else in the vehicle, so supposition is he stabbed himself," Philadelphia Police


Police say Campbell was suffering from multiple stab wounds as he drove down the 600 block of Packer Avenue just before 2 a.m. Wednesday morning when he struck an Acura SUV head on.


Three of the Acura's four passengers — identified as 36-year-old Joseph Ferry of South Philadelphia, 35-year-old Kelly Wiseley of Glenolden, and 31-year-old Dennis Palandro of Morton — were killed.  Ferry and Wiseley just got engaged over the holidays.

Note: The father of the survivor of the crash is my sister-in-law’s cousin. I’ve known the family for most of my life. My heart goes out to them.
Posted by Paul Davis at 3:00 PM