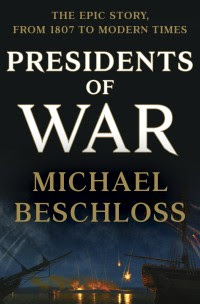 Joseph C. Goulden, a veteran journalist and author of Korea: The Untold Story of the War and Truth Is the First Casualty, on the Tonkin resolution, offers a good review in the Washington Times of Michael Beschloss’ Presidents Of War.

A distinguished historian who has written 10 outstanding books perhaps can be excused for a single outrageous sentence that leaves a reader shaking his head in disbelief.

Michael Beschloss makes just such a misstep in his otherwise magnificent account of how American presidents went to war over the centuries. He writes that the way the nation entered World War II “did so much to elevate [President] Roosevelt’s standing that it increased the temptation for later Presidents to elevate their reputation by seeking foreign conflict.”

Pardon my dissenting blink. As Washington correspondent for The Philadelphia Inquirer 1967-68, I witnessed Lyndon Johnson’s open agony on a daily basis as he fought a war that essentially destroyed his presidency. And I thought of the frustrations endured by President Truman by waging the Korean conflict into which he was abruptly thrust. Neither man felt that war “elevated” their reputations, to be sure.

That quibble aside, Mr. Beschloss offers fascinating insight about how presidents have dealt with what is surely their most demanding responsibility: That of asking Congress to put the nation into war.

The men who created the United States wisely decided that such a decision should not be left to the president alone. Memories of European wars commenced by unrestricted monarchs haunted the Founding Fathers. In their view, “war would be a last resort under the political system they had invented.”