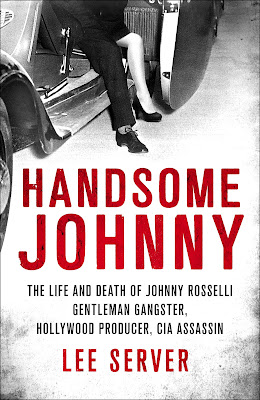 
He always had money and tipped generously. He was always groomed perfectly. He was always with a beautiful actress. He was always seated at the best spot in a nightclub or restaurant. He was always in the company of wealthy and powerful men on the golf course and tennis court and at a card table. He was the intimate friend of movie studio bosses, casino bosses, major entertainers and notorious mobsters. He was called “Gentleman Johnny” or “Handsome Johnny.”


Johnny Rosselli lived a charmed life right up until he ended up dead in a 55-gallon oil drum floating in the Atlantic.


Lee Server’s “Handsome Johnny: The Life and Death of Johnny Rosselli: Gentleman Gangster, Hollywood Producer, CIA Assassin” offers a complete picture of a smooth operator who began life as Filippo Sacco in Frosinone, Italy, on July 4, 1905. Raised in Boston, his early travels took him across the country to Chicago, where he changed his name and then changed his life.


“He covered his tracks well — his origins, his early years. The FBI was sure he was not who he said he was. But who was he? What was he hiding?” Mr. Server writes. “For a guy whom everybody in law enforcement knew about for decades — one of Al Capone’s boy wonders, the Mob’s man in Hollywood, big wheel in Las Vegas, the hundreds of pages of police reports in which he figured, numerous arrests and trials, headline convictions — he was a mystery.”


You can read the rest of my review via the below link:

https://www.washingtontimes.com/news/2019/jan/13/book-review-handsome-johnny-by-lee-server/
Posted by Paul Davis at 3:57 AM