A Little Humor: An Aggressive Cop 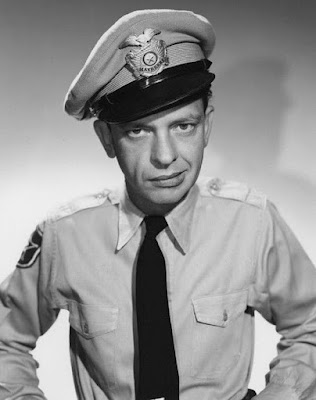 A calm veteran police officer was out with his new partner, an aggressive and officious officer.

At roll call earlier that morning, the officers were told to disperse crowds of people who were loitering.

The officers later drove up a street and observed a small crowd standing on a corner.

The aggressive cop rolled down his window and said, “Let’s get off the corner, people.”
The people looked at the officer, but no one moved.

The aggressive cop barked loudly, “I said, get off that corner, right now!”

Confused and somewhat intimidated, the group of people left.
Beaming with pride, the aggressive cop looked at his less aggressive partner and said, “Now that’s how you do it.”
“OK,” chuckled his partner. “But that was a bus stop.”

Note: The above photo is of actor Don Knotts as Deputy Barney Fife from The Andy Griffith Show.
Posted by Paul Davis at 2:52 PM