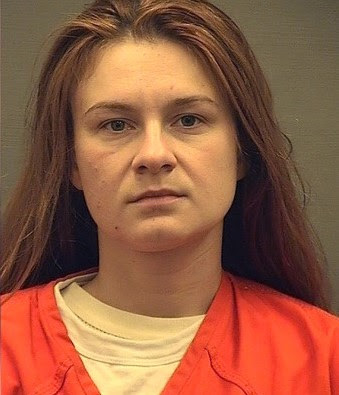 Mariia Butina, a Russian national (seen in the above mugshot), was sentenced today to 18 months in prison after earlier pleading guilty to a federal charge of conspiracy to act as an agent of a foreign government.

The announcement was made by Assistant Attorney General for National Security John C. Demers, U.S. Attorney for the District of Columbia Jessie K. Liu, and Assistant Director in Charge Nancy McNamara of the FBI’s Washington Field Office.
Butina, 30, a Russian citizen who had been residing in Washington D.C., pled guilty on Dec. 13, 2018, in the U.S. District Court for the District of Columbia.  She was sentenced by Judge Tanya S. Chutkan.  Following her incarceration, she is to be deported to Russia.
According to the government’s evidence, from approximately 2015 to 2017, Butina acted as an agent of a Russian government official.  Under his direction, she provided key information about Americans who were in a position to influence United States politics and took steps to establish an unofficial line of communication between Russia and these Americans.  As described in the plea documents, Butina sought to do so for the benefit of the Russian Federation. She took these actions without providing the required notifications to the Attorney General that she was in fact acting as an agent of the Russian Federation.
Butina was arrested on July 15, 2018, in Washington, D.C., and has been in custody ever since.  Butina will get credit for the time she already has served.  The court also granted a government motion that led to a reduced sentence in the case.
The investigation into this matter was conducted by the FBI’s Washington Field Office.  The case was prosecuted by Assistant U.S. Attorneys Erik M. Kenerson, Thomas N. Saunders, and Jolie Zimmerman of the National Security Section of the U.S. Attorney’s Office for the District of Columbia, and Trial Attorney William A. Mackie of the National Security Division of the U.S. Department of Justice.
Posted by Paul Davis at 6:42 PM