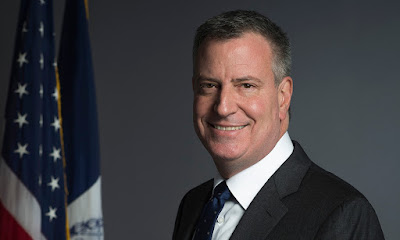 Zack Budryk at thehill.com offers a piece on NYC Mayor De Blasio being blasted by a police union over comments he made at the Democratic debate last night.
The largest union representing New York City police officers blasted Mayor Bill de Blasio (D), a frequent target, for his comments during Wednesday night’s Democratic debate about discussing how to avoid police run-ins with his African American son.
"Mayor de Blasio has apparently learned nothing over the past six years about the extremely damaging impact of anti-police rhetoric on both cops and the communities we serve,” Patrolmen's Benevolent Association of New York President Patrick Lynch said in a statement.
You can read the rest of the piece via the below link:
https://thehill.com/homenews/campaign/450644-new-york-police-union-blasts-de-blasios-comments-on-cops-in-debate
Posted by Paul Davis at 8:27 PM