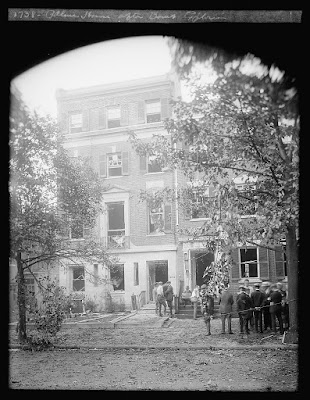 The FBI offers the below information and the above photo:

A carefully coordinated campaign of terror had begun.
The targets included three judges, a state representative, a silk manufacturer, an immigration official, a mayor, Catholic priests, and the U.S. attorney general.
The first two bombs exploded at around 11:15 p.m. on June 2, 1919—a century ago this month. By 1:00 a.m. the next morning, all of the devices had detonated.
The force of the explosions, each fueled by around 20 pounds of dynamite, was massive. Entire neighborhoods were shaken by the blasts. Homes were destroyed or badly damaged. Many windows were completely blown out. Flying glass and debris wounded several people, including a young girl. One night watchman was killed.
In the nation’s capital, Attorney General A. Mitchell Palmer and his wife Roberta were lucky to escape. They were upstairs when a huge explosion rocked their home. The bomber was not so fortunate. His device went off too early as he approached the front door, killing him instantly.
The June 2 bombings were hardly the first of their kind.
In late April, bombs had been mailed to around three dozen government and business leaders nationwide, including a Bureau agent. Alert postal workers intercepted many of the packages, but a housekeeper in Georgia had her hands blown off after opening one of the parcels. Similar bombings had also taken place across the country in previous months; one killed 10 police detectives. Although it was thought the various attacks might be related, a widespread conspiracy could not be proven.
Who was behind this wave of attacks? All signs pointed to anarchists, a group of radicals who wanted to get rid of capitalism, organized religion, and government itself. Violence and bloodshed were their main weapons. Over they years, anarchists had gone so far as to kill several world leaders, including U.S. President William McKinley in 1901.
At the time of the 1919 attacks, the Bureau of Investigation, the forerunner of today’s FBI, was just over a decade old. It had limited resources and was filled largely with inexperienced investigators; most of the tools and technologies that we associate with modern-day policing—many pioneered by the FBI—had yet to be invented.
After the June bombings, Attorney General Palmer sprung into action, putting significant resources into finding those responsible for what he and others called the “outrages.” He named William Flynn, former head of the U.S. Secret Service, to lead the Bureau.
Flynn began work immediately, convening a conference of federal and local law enforcement officials to coordinate efforts. He also traveled to Philadelphia and New York to parcel out leads based incoming evidence.
Much of that evidence came from the D.C. explosion. Investigators painstakingly traced what was left of the bomber and his effects—train ticket stubs, bits of clothing, and more.
Two clues proved most useful. Scraps of a pink flyer titled “Plain Words”—an anarchist call to action linguistically linked to the Italians—were found scattered nearby and at every bomb site. Also located was a piece of the bomber’s scalp. The thick, dark hair helped investigators figure out that the D.C. bomber almost certainly was Carlo Valdinoci, a young Italian anarchist.
Agents and police also conducted many interviews, worked with informants, and drew links to the intended targets, all of whom had angered anarchists in some respect.
No other bombers were directly identified. The anarchist movement in the U.S. lost steam, and the threat faded as the nation turned its eyes toward the “normalcy” President Harding had promised in his campaign for president.
In both the short and long run, the attacks had a profound impact on the Bureau. The organization gained new resources and valuable experience in addressing national security threats. At the same time, Flynn brought in a 24-year-old Justice Department lawyer named J. Edgar Hoover to run a new division of intelligence. Within five years, Hoover would take the helm of the Bureau, ushering in a series of reforms that created the modern-day FBI.
Posted by Paul Davis at 1:48 PM