Showdown At The North Pole: How The United States Can Win The Arctic War 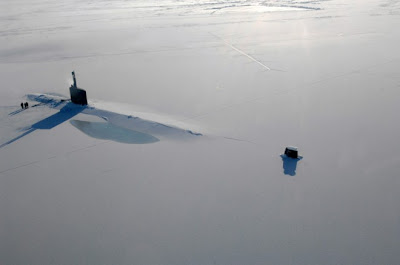 I've long been interested in submarines, even before I served two years on a U.S. Navy tugboat that was attached to Submarine Squadron 14 at the nuclear submarine base at Holy Loch, Scotland in the mid-1970s.

I have vivid memories of our rendezvous at sea with the big "boomer" nuclear missile submarines, and the smaller, faster and lethal "attack" submarines. Even though I previously served two years on an aircraft carrier during the Vietnam War, I found the submarines to be quite impressive.

So it was with some interest that I read a piece at Wired.com on how the United States would win an Arctic War if such a war were to happen.

Proponents of global climate change see a day when there will be ice-free Arctic summers, which, as David Axe notes, will allow shipping and oil and natural-gas extraction. Some fear the United States is not prepared to "secure our slice of the Arctic pie."

"The thing is, it’s not icebreakers and patches of wind-blasted tarmac that would really matter in some future North Pole showdown," Axe wrote. "In the Arctic, as in any sea battle, American nuclear attack submarines — quiet, versatile and lethal — would make all the difference. U.S. subs have been sneaking around under the Arctic ice and occasionally surfacing, for decades. Today, they even carry geologists and other scientists in order to help map Arctic mineral deposits."

“In addition to being more heavily armed than most foreign boats, U.S. submarines generally have superior quieting and combat systems, better-trained crewmen, and much more rigorous maintenance standards,” Bob Work wrote in 2008, before becoming Navy undersecretary. “As a result, the U.S. submarine force has generally been confident that it could defeat any potential undersea opponent, even if significantly outnumbered.”