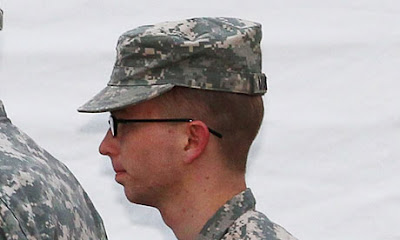 Ed Pilkington at the British newspaper the Guardian reports on the Army PFC Bradley Manning court-martial.

The U.S. government is planning to call an American, possibly one of the 22 Navy Seals involved in the Abbottabad raid that killed Osama bin Laden, to give evidence at the trial of Bradley Manning about how he discovered digital material later revealed to contain WikiLeaks disclosures, a military court heard on Tuesday.

Prosecutors intend to bring to the witness stand an anonymous man they are calling "John Doe" who would testify how he entered a room in the al-Qaida leader's hideout in Pakistan, grabbed three items of digital media and removed it. Later, four separate files of information were off-loaded with WikiLeaks contents on them.

The testimony would be used, the prosecution said, to show that Bin Laden had actively sought access to the material Manning had passed to WikiLeaks. That in turn would provide supporting evidence for the most serious charge against the soldier – that he had "aided the enemy".

http://www.guardian.co.uk/world/2013/feb/26/bradley-manning-prosecution-seal-bin-laden
Posted by Paul Davis at 1:03 AM