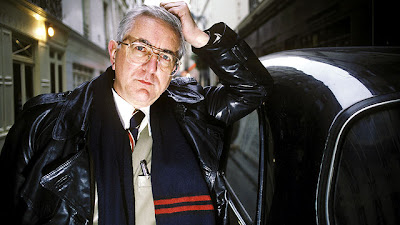 I like his unnamed narrator in the early novels (called Harry Palmer in the Michael Caine films). He is sort of a British Philip Marlowe working the espionage beat.

I have in my library several of Deighton's hardback books, including his Bernard Sansom spy series.

I recall in the sixties that some critics and reviewers called Deighton's working class hero the "anti-Bond," but I like both Fleming and Deighton. Their thrillers were different, but both were well done in their own way.

I also liked the Michael Caine films made from Deighton's novels and the later TV series starring Ian Holm as Bernard Sansom.

You can read Jake Kerridge's 2009 interview with Len Deighton in the British newspaper the Telegraph via the below link:

http://www.telegraph.co.uk/culture/books/4681966/Interview-with-Len-Deighton.html
Posted by Paul Davis at 7:08 AM