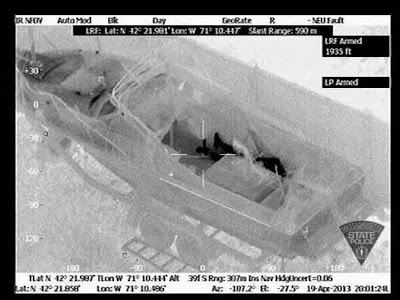 Brian X. McClone at Philly.com offered a piece on how the Boston Marathon Bomber Number 2 was captured.

A bloody trail from the carjacked car. More blood behind a house in Watertown. Then an unsuspecting home owner who finds a young man inside his winterized boat.

Those were the clues that led law enforcement to find Dzhokhar Tsarnaev, 19, huddled inside a boat behind a house on Franklin Street in the suburb of Boston.

"He didn’t go straight to the boat. We found blood in the car he abandoned [earlier in the day]. We found blood inside a house inside the perimenter," Boston Police Commissioner Ed Davis said at a press conference Friday night. "We thought we got the perimeter solid. ... He was behind the house for a little after."

They showed the quick change in atmosphere in and around Boston after the second of two brothers suspected in the Boston Marathon bombings Monday afternoon. Jubilation and relief Friday evening replaced anxiety and fear that held the region in check the whole week.

"It seems like many months since Monday, April 15, since the bombing at the Boston Marathon," FBI Agent-in-Charge Richard DesLauriers said at the press conference. "But it’s been only five days."