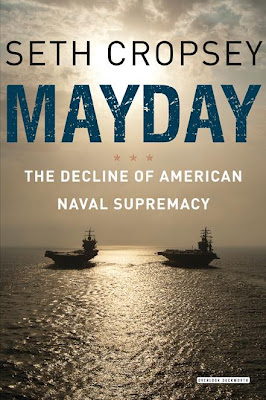 Robert F. Dunn at the Washington Times offers a review of Mayday: The Decline of American Naval Supremacy.

“Mayday,” the universal distress call, is herein sounded for a U.S. Navy in serious trouble. Even as the Navy continues to fulfill commitments around the world, the number of ships and aircraft is decreasing, and those that remain are aging at an unacceptable rate.

Commitments to allies and theater commanders go unfilled and maintenance is deferred, again and again. From nearly 600 ships at the end of the Reagan era, the count is below 300 today and edging lower. Individual ship and aircraft capabilities are rising, but numbers count, in a big way. For a maritime power that is the United States, with promises to allies worldwide, facing a growing Chinese capability and a Congress tied in knots over issues far removed from defense of the homeland, such clarion calls are indeed in order.

Seth Cropsey, a former assistant secretary of the Navy in the Reagan administration and now a fellow at the Hudson Institute, delivers clear arguments for stopping the current decimation of the U.S. Navy by political budget and bureaucratic actions, including putting a muzzle on naval leaders speaking out. He argues cogently that cutting back on American sea power promises nothing except advancing powerlessness, the suspicion of allies and global challenges to American security, especially from China. He goes on to describe what he thinks are the major reasons for permitting the current decimation to continue.

The foremost problem is that Americans, by and large, do not appreciate what sea power does for peace and prosperity. This is mostly the fault of the Navy for not delivering the message. On the other hand, recent administrations share the blame by silencing individual services, including the Navy, from explaining to policymakers and the public their particular role in defending the nation. Also to be blamed is the politically correct imperative of at least the last 25 years that dictates that defense dollars be apportioned equally among the three military departments and the defense bureaucracy, regardless of the projected role of each service in the national strategy, whatever that may be.