Krauthammer On Border Security: Ask Obama Why He's Got A Fence Around The White House 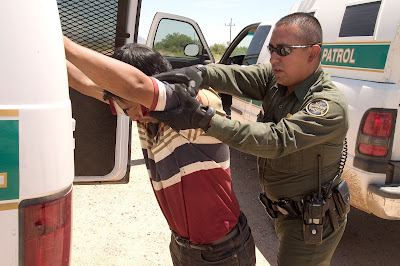 The Daily Caller reports that on a recent radio program, syndicated columnist Charles Krauthammer offered some good ideas on border security, which must come before immigration reform.

Krauthammer said that Florida Republican Sen. Marco Rubio, who has led the Republican charge for the “Gang of Eight” bill, should seek enforcement measures including a border fence.

“I think he’ll proactively seek real measures — universal e-verify, the tracking system for the visa violations, which as you know, accounts for 40 percent of illegals in the country, and I’m with you, a fence from left to right, from east to west, except obviously the mountainous areas. We know that fences work.”

“If the president tells you fences don’t work, ask him why he’s got one around the White House.

Note: The above U.S. Customs and Border Patrol photo was taken by Gerald L. Nino
Posted by Paul Davis at 10:08 AM

Labels: border security, Charles Krauthammer, immigration reform, The Daily Caller, U.S. Customs and Border Patrol, why does Obama have a fence around the White House if fences dont work on the border