Russia's Bin Laden: Introducing Doku Umarov, The Chechen Terrorist Chief Who May Be Behind The Boston Marathon Bombings 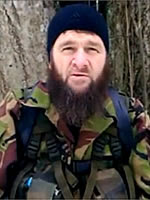 FoxNews.com offers a piece on Doku Umarov (seen in the above U.S. State Department photo), the Chechen terrorist leader who may or may not be behind the Boston Marathon bombings.

Doku Umarov could be one of the most important -- and dangerous -- terrorists Americans have never heard of.

The Chechen Islamic radical, who leads a group called the Caucasus Emirate, for years has been one of Russia's most-wanted men. He and his organization have claimed responsibility for attacks killing dozens of civilians, including the 2010 Moscow subway bombings. Since 2011, the U.S. State Department has offered $5 million for information on his whereabouts.

Though nicknamed Russia's bin Laden, his name never had the global resonance of Al Qaeda's founder or its deputies. But in the wake of the Boston Marathon attack, Umarov is receiving worldwide attention.

Whether he or the Caucasus Emirate are in any way connected to the bombing is not known. Sources told Fox News that investigators are looking into possible ties between Tamerlan Tsarnaev, the suspect who died in a shootout early Friday in Boston, and the Caucasus Emirate.

You can also read the "Rewards for Justice" page on Doku Umarov via the below link: