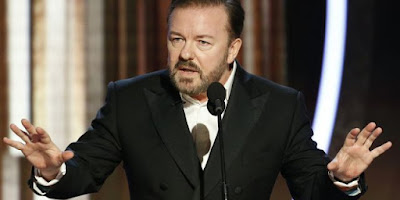 The biggest stars in TV and film gathered in Beverly Hills in the hopes of kicking off the 2020 awards season with a highly coveted Golden Globe award, and notoriously controversial host Ricky Gervais wasted no time laying into the Hollywood elite vying for a big win.

… Gervais concluded his scathing monologue by warning the celebrities not to make any political or "woke" statements when accepting their awards.


"You’re in no position to lecture the public about anything," he declared. "You know nothing about the real world. Most of you spent less time in school than Greta Thunberg."
You can read the rest of the piece via the below link:

https://www.foxnews.com/entertainment/golden-globes-2020-ricky-gervais
Posted by Paul Davis at 10:13 AM