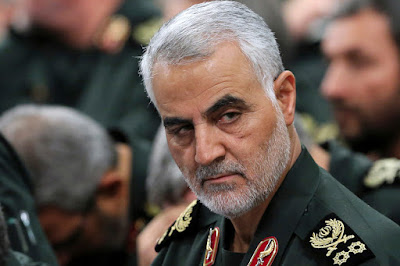 Kudos to President Trump for ordering the strike that took out this Iranian general and murdering terrorist, as well as other bad actors.

The killing of Iranian terror-meister Qassem Soleimaniin a targeted US air strike in Baghdad on Thursday will have a dramatic impact on the stability of the Iranian regime and its ability to conduct oversea terrorist operations.


Wherever Iran has sent its expeditionary Quds Force to war — in Lebanon, Syria, Iraq, Afghanistan and Yemen — there you would find Soleimani.


During the early years of the US occupation of Iraq, he became the puppet master of successive Iraqi governments. Not only did he select presidents and prime ministers, but over the years he placed his minions in key positions in every Iraqi government ministry where they controlled personnel and finance decisions.


He also set up a far-flung financial empire, reportedly taking a percentage of the float on all foreign currency exchange from Iraqi banks, netting close to $1 billion per month in black money to finance his terror empire.

You can read the rest of the piece via the below link:
https://nypost.com/2020/01/04/inside-the-twisted-terrible-reign-of-iranian-general-qassem-soleimani/
Posted by Paul Davis at 11:46 PM