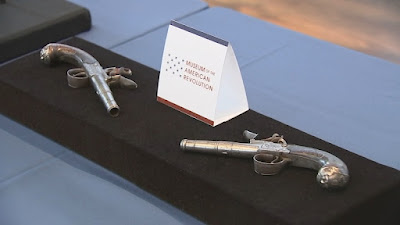 A number of artifacts stolen during the 1960s and 1970s have been recovered and returned to the owning museums, announced Jacqueline Maguire, Special Agent in Charge of the FBI’s Philadelphia Division; Jennifer Williams, United States Attorney for the Eastern District of Pennsylvania; and Kevin Steele, Montgomery County (Pennsylvania) District Attorney.

FBI art crime agents and detectives from the Upper Merion Township Police Department recovered the artifacts as part of an investigation into the 1971 theft and 2018 sale of a rare surviving 1775 rifle made by Pennsylvania master gunsmith Christian Oerter.

Thomas Gavin, of Pottstown, Pennsylvania, who pleaded guilty in July to selling the Oerter rifle, had admitted to stealing it and these additional artifacts. Gavin was sentenced last month for disposing of the stolen rifle.

“In law enforcement, as in any profession, there are good days and bad days. Today, standing here along with our partners, is one of those good days,” said Special Agent in Charge Maguire. “The absence of the items from these museums represented not just a physical or financial loss, but a loss to every visitor, every student, and every researcher who didn’t get to see the items over the years and missed out on important pieces of our nation’s heritage. The absence of these items was, for so long, a loss to the historical record. The FBI is honored to have helped correct that loss and return these artifacts to the institutions from which they were stolen so long ago.”

“Today’s event at the Museum of the American Revolution was incredibly exciting and inspirational to me, as an American history enthusiast, a prosecutor working in historic Philadelphia for most of my career, and a proud member of a military family,” said U.S. Attorney Williams. “This collection of artifacts being repatriated to museums across our District is worthy of celebration, something we rarely get to do in my line of work. And I want to acknowledge and thank the purchasers of these items who waived ownership so that they could be returned: you are true patriots.”

“It took more than 50 years but now these significant pieces of American history are going back to their home museums where they can be seen and enjoyed by all Americans,” said District Attorney Steele. “It’s thanks to the tireless efforts of two Upper Merion Township Police detectives, the FBI and the U.S. Attorney’s Office that these firearms have been recovered and are now safe. I am so proud of their work.”

Maguire and Williams thanked the Montgomery County District Attorney’s Office and Upper Merion Township Police Department for their assistance with the investigation. They also credited Assistant United States Attorney K.T. Newton for her efforts in this matter and thanked the staff of the Museum of the American Revolution for their assistance, as well.