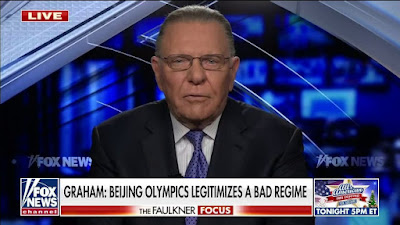 General Jack Keane (retired), one of our best minds on military and foreign affairs, (I wish he were president) appeared on Fox News.

Fox News senior strategic analyst Gen. Jack Keane argued on "The Faulkner Focus" Thursday that the collapse of Afghanistan was an "accelerant" for America's adversaries to try to take advantage of President Biden's "accommodation" administration as Russian President Vladimir Putin gathers forces on the Ukraine border.

GEN. JACK KEANE: I do believe that this administration is being challenged by Russia, Iran and also China. They're looking at it as an appeasement and accommodation administration that can be taken advantage of. And certainly after the collapse of Afghanistan, that has become an accelerant to our adversaries moving even more earnestly to take advantage of it. Witness what's happening here with 110,000 troops on the [Ukraine] border.

You can watch the full interview via the below link: