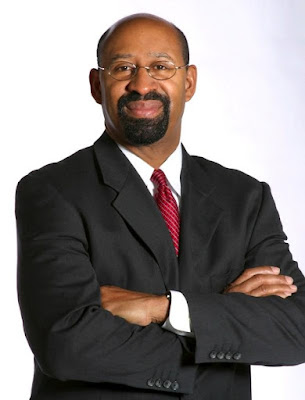 I interviewed former Philadelphia Mayor Michael Nutter (seen in the above photo) today for my Philadelphia Weekly Crime Beat column.

I asked Mayor Nutter about his Philadelphia Inquirer op-ed that criticized Philadelphia District Attorney Larry Krasner, as well as other crime issues.

His op-ed took Krasner to task over the DA's remarks about Philadelphia not being in a crime crisis.

are some of the worst, most ignorant and most insulting comments I have ever heard spoken by an elected official.

It takes a certain audacity of ignorance and white privilege to say that right now. As of Monday night, 521 people, souls, spirits have been vanquished, eliminated, murdered in our City of Brotherly Love and Sisterly Affection, the most since 1960.

I have to wonder what kind of messed up world of white wokeness Krasner is living in to have so little regard for human lives lost, many of them black and brown, while he advances his own national profile as a progressive district attorney.

… As someone who has lived the experience of a black man in Philadelphia and worked at the highest level of city government, I see that police and judges are trying to keep Philadelphians safe, but Krasner is not. No matter what he says, this city is experiencing a crisis of violence and murder. If he can’t see that, he is unfit to serve the residents of Philadelphia.

You can read the rest of the op-ed via the below link:

My Philadelphia Weekly Crime Beat on Mayor Nutter will come out on Thursday, December 23rd.