Five Decembers: My Washington Times On Crime Column On A Crime Thriller With A WWII Backdrop 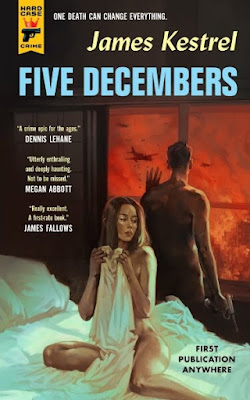 The Washington Times published my On Crime column on the crime thriller Five Decembers.

As a teenage sailor, I served aboard an aircraft carrier in the early 1970s during the Vietnam War. In between line periods in the Gulf of Tonkin off the coast of North Vietnam, we made the memorable port of calls to Honolulu, Hong Kong, Japan and the Philippines. I was interested in James Kestrel’s crime thriller, “Five Decembers,” as his characters operate in those interesting places, albeit during an earlier era, World War II.

I reached out to James Kestrel and asked what inspired him to write a crime thriller set in World War II.

“I have always been interested in history, and the history of WWII is particularly interesting because it still has so many visible impacts on the world,” Mr. Kestrel replied. “I live in Honolulu, so on any given weekend, I might run across a pillbox on a beach or an old ammunition storage tunnel in the side of a mountain. My grandfather and great uncle were both in the US Army Air Forces during the war, in Europe, and as I child, I used to love it whenever I could stay up late enough to hear them talk about their experiences.”

Mr. Kestrel said his day job often took him to Japan and Hong Kong, and, wanting to write a book on a much larger canvas than anything he’d tried before, he began to explore Tokyo and Hong Kong.

How would you describe the novel?

“It’s the story of a Honolulu Police Department detective who catches a double murder investigation in late November 1941. Unfortunately for him, his investigation leads him across the Pacific to Hong Kong, which is where he is when America is drawn into the war,” Mr. Kestrel said. “It’s certainly a noir novel, but it has a middle section that is probably different than what most readers would expect going into a book that starts off with a detective in a fedora drinking a whiskey in a Chinatown dive.”