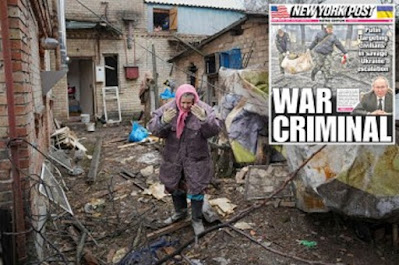 The New York Post Editorial Board called Putin a war criminal in an editorial.

“What we have seen already from Vladimir Putin’s regime in the use of the munitions that they have already been dropping on innocent civilians, in my view, already fully qualifies as a war crime,” UK Prime Minister Boris Johnson said Wednesday.

A prosecutor at the International Criminal Court, Karim Khan, said he was investigating possible war crimes, examining missile strikes on residential buildings in Kharkiv and other cities.

President Biden said “it’s clear” that Russian forces are targeting civilians. He stopped short of accusing Putin of war crimes, but there’s certainly a case against the Russian dictator.