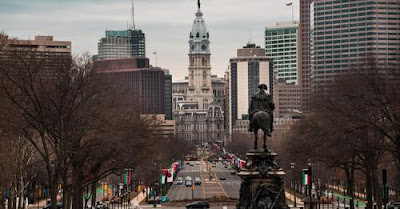 Patrick Rapa, writing a monthly round up of books for the Philadelphia Inquirer, notes that he appreciates writers who get Philly right.

Most of the time, authenticity in art is a nebulous sort of thing, better settled by a smell test than a Google search. Of course, some stuff is going to be made up — it’s fiction. The story only needs to feel real.

But then there are those irksome bits: The details that don’t ring true because you know better. Because the author just didn’t do the homework.

Ever read a book about Philly that mentions a mom-and-pop liquor store? Or a 14th Street? Infuriating. I saw a movie five years ago that referred to Broad Street as Broadway and I’m still mad about it. Some of that comes from that little-brother chip on our shoulder we’re all born with around here. How dare CNN not label us on their hurricane maps? How dare Independence Day destroy us off screen?

But when an author gets it right, when their Philly feels like the real Philly, all is right with the world. Happily, I’ve read a couple locally set novels that pass this test, both by authors who have spent some time here.

One is Temple professor Liz Moore’s powerful Long Bright River from 2020, about a cop searching for her opioid-using sister on the darkest stretches of Kensington Avenue. We see the old boy’s club police precinct, the scared citizens, the lost souls wandering the streets in a stupor, and we recognize our city and its shortcomings. It doesn’t surprise me that a film adaptation is in the works; I am delighted to hear that Moore herself will be writing the screenplay. Long Bright River doesn’t need a Hollywood ending.

Patrick Rapa notes that he becomes annoyed when writers and film makers get Philly wrong, such as mentioning 14th Street.

I too become annoyed when writers get Philly wrong, such as when Mr. Rapa writes about a Philadelphia police precinct.

A minor error, but a bit ironic, and a bit amusing, considering Mr. Rapa's comments.

Note: I wish Frank Wilson, my former editor at the Philadelphia Inquirer, was still the books editor.