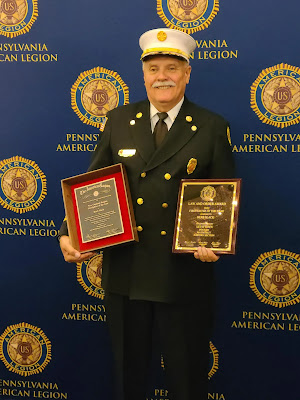 I was pleased to read that Herb Slack received the "Firefighter of the Year" award from the American Legion.

I knew and worked with Herb Slack back when he was the Naval Support Activity’s safety officer, and later the security officer, at the naval base in Northeast Philadelphia.

I was at the time the administrative officer of a Defense Department tenant command on the naval base, and as I oversaw security and safety programs for the command, I often worked with Herb Slack on base safety and security issues. I also served with him on several inter-agency committees.

Levittownnow.com offers a report on the award:

Slack, who has spent his life in the fire service, was awarded the 2022 Firefighter of the Year Award from the Pennsylvania chapter of the organization.

Slack was nominated by the Levittown Memorial American Legion Post 960 in Middletown Township’s Levittown section for the award and was selected from all nominations across the state.

Slack joined the fire service at 16 and worked his way through Bristol Borough’s service with roles as a captain, assistant chief and was first elected chief in 1975.

Slack has served as Bristol Borough’s fire marshal and was appointed borough-wide chief in 2005. He has command over all fire operations within the borough.

“Chief Slack also served his community as a social studies teacher, a local coach and retired after 33 years from a civil service position with the U.S. Department of the Navy having worked at the Philadelphia Navy Yard and the Naval Support Activity Philadelphia,” a statement said.