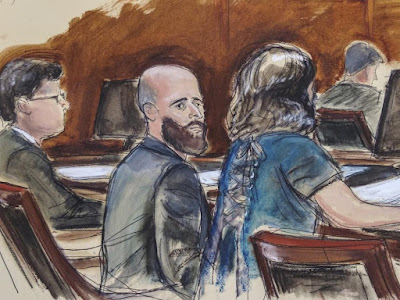 The Associated Press offers a report on the conviction of a former CIA engineer for the biggest theft of classified information in CIA history .

NEW YORK (AP) — A former CIA software engineer was convicted Wednesday of federal charges accusing him of the biggest theft of classified information in CIA history.

Joshua Schulte, who chose to defend himself at a New York City retrial, had told jurors in closing arguments that the CIA and FBI made him a scapegoat for an embarrassing public release of a trove of CIA secrets by WikiLeaks in 2017.

Schulte watched without visibly reacting as U.S. District Judge Jesse M. Furman announced the guilty verdict on nine counts, which was reached in mid-afternoon by a jury that had deliberated since Friday.

The so-called Vault 7 leak revealed how the CIA hacked Apple and Android smartphones in overseas spying operations, and efforts to turn internet-connected televisions into listening devices. Prior to his arrest, Schulte had helped create the hacking tools as a coder at the agency’s headquarters in Langley, Virginia.

A sentencing date was not immediately set because Schulte still awaits trial on charges of possessing and transporting child pornography. He has pleaded not guilty.