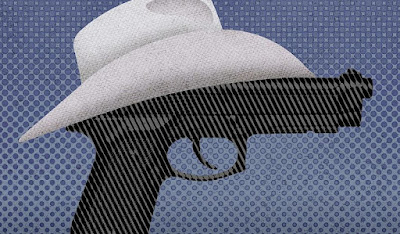 David Keene, the editor-at-large at the Washington Times, where my On Crime column regularly appears, offers a piece on good guys with guns.

On May 24, trained police stood by for an hour while a crazed gunman killed 19 students and two teachers in a Uvalde, Texas, school.

Weeks later, a 22-year-old Hoosier saw another young man gunning down shoppers at an Indiana mall. Within seconds, he got others to safety while drawing his own gun and expertly shooting the terrorist. Not surprisingly, it is little wonder that a recent opinion poll revealed that far more Americans have faith in an armed civilian to stop a mass shooting than in either local or federal law enforcement officers.

The Trafalgar Group poll was actually taken days before young hero Eli Dicken carried his newly legal Glock into the mall. Indiana had just adopted what is called a “constitutional carry law,” enabling law-abiding gun owners to carry a concealed firearm without a special license or permit, thanks to the Supreme Court decisions that make these laws more likely. The poll results might well have been even starker now.

The national poll showed that 41.8% of respondents have more faith in a nearby armed civilian, while only 25.1% would trust the police under such circumstances, and 10.3% of those surveyed who would have more faith in a federal agent. Another 22.8% rather fatalistically seemed to believe that none of these “good guys” with a gun would be able to do much to stop a “bad guy” with a gun.