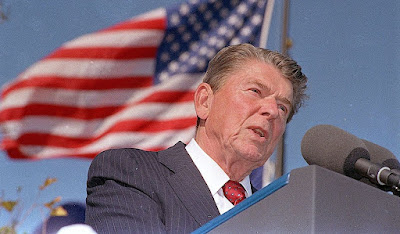 In her Washington Times column, Jennifer Harper, wrote about a poll that noted a bipartisan national dissatisfaction. She suggested that it is time to revisit the wisdom of President Ronald Reagan.

“Here’s what the 40th president said in a speech delivered from the deck of an aircraft carrier in New York Harbor, on July 4, 1986: “The things that unite us — America’s past of which we’re so proud, our hopes and aspirations for the future of the world and this much-loved country — these things far outweigh what little divides us,” Reagan told the nation.

“And so tonight we reaffirm that Jew and gentile, we are one nation under God; that Black and White, we are one nation indivisible; that Republican and Democrat, we are all Americans. Tonight, with heart and hand, through whatever trial and travail, we pledge ourselves to each other and to the cause of human freedom, the cause that has given light to this land and hope to the world,” the president said.

“My fellow Americans, we’re known around the world as a confident and a happy people. Tonight there’s much to celebrate and many blessings to be grateful for. So while it’s good to talk about serious things, it’s just as important and just as American to have some fun. Now, let’s have some fun — let the celebration begin,” Reagan advised.