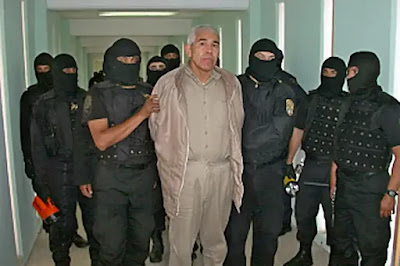 The New York Post offers a piece on the capture of the Mexican drug lord believed to be responsible for the murder of DEA Special Agent Enrique “Kiki” Camarena in 1985.

A fugitive Mexican drug lord was busted Friday to face extradition in the notorious 1985 torture and murder of an undercover US Drug Enforcement Administration agent.

Rafael Caro Quintero, a founder of the once-powerful Guadalajara Cartel, was nabbed by Mexican authorities in the northern state of Chihuahua, law enforcement sources confirmed with The Post.

Caro Quintero, who’s believed to be between 59 and 69, served 28 years of a 40-year sentence in Mexico for the grisly killing of DEA agent Enrique “Kiki” Camarena before being freed in 2013 on a technicality involving the jurisdiction of the court in which he was convicted.

The US — which has called Caro-Quintero the “mastermind” behind Camarena’s slaying — requested his extradition days after he was sprung from the “Puente Grande” prison in Guadalajara and put a bounty on his head that eventually reached $20 million.