It's Your Funeral: My Broad + Liberty Piece On The Major Kensington Drug Boss Sentenced To Prison For Distributing Narcotics Labeled ‘Funeral’ 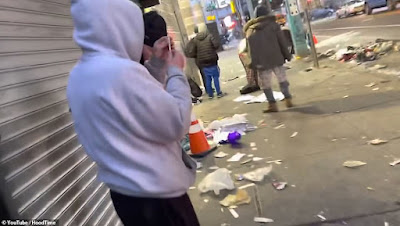 Broad + Liberty published my piece today on the open-air drug market in Kensington and the Feds' takedown of a major drug dealer. 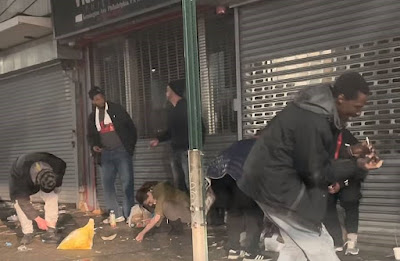 The late Irish poet and playwright Oscar Wilde said that his father once told him that he was good for nothing. Wilde replied, “That’s not true, Father. I can serve as a bad example for others.”

It appears that Kensington’s major open-air drug market can serve as a bad example for Mexico.

According to an Associated Press report, Mexico is using a video of homeless and drug-addicted people in Kensington in their national anti-drug campaign. Although the ad does not identify the city or neighborhood, Philadelphians recognize the area as our very own Kensington.

A while back, I went on a ride-along with a Philadelphia detective and we passed the area under the El near the Market-Frankford train station. I saw the homeless and hopeless mentally ill and alcohol and drug-addled people mulling and staggering along the graffiti-tainted and trash-littered streets. Apparently, the sight of this neighborhood and the near-zombie inhabitants can even shock people in a third-world country.

The irony of Mexico using an anti-drug ad depicting Philadelphia is that much of the drugs the people in Kensington are using hail from Mexico, including the Fentanyl that is sending drug users to the morgue

Many years ago, while serving in the U.S. Navy, I was a frequent visitor to Tijuana, Mexico. Traveling beyond Avenida Revolucion, the main area for bargain shops, bars and restaurants, I passed through some of Mexico’s worst poverty-stricken areas. I recall the poor people and the primitive villages, but I don’t recall seeing many drug addicts walking the roads. I suppose the Mexican government wants to discourage their people from actually taking the drugs their cartels produce and ship to places like Kensington.

But there is some good news coming out of Kensington. On November 29, the U.S. Attorney Jacqueline C. Romero announced that a major drug trafficker named Ricardo Carrion, a.k.a “PR,” was sentenced to 19 years and four months in federal prison for selling crack and heroin in Kensington.

According to the U.S. Attorney’s office, Carrion’s drug trafficking organization operated two blocks from the notorious intersection of Kensington and Allegheny Avenues that was featured in the Mexican ads.

The arrest and conviction of Carrion originated from a joint investigation into the scourge of drug trafficking and overdoses in the Kensington area conducted by the U.S. Drug Enforcement Administration (DEA) and the Philadelphia Police Department.

“After a series of search warrants were executed in 2019, the DEA developed information that the defendant was the supplier of narcotics for an organization selling heroin stamped with the word “Funeral” to advertise its potency and lethalness to addicted consumers,” stated the U.S. Attorney’s Office.

The U.S. Attorney’s Office offered covert surveillance that showed Carrion repeatedly carrying large bags into stash houses. When investigators initiated a traffic stop of a cab in which Carrion was the sole passenger, they recovered a bag containing over 3,300 flip-top containers of crack cocaine.

“This years-long drug trafficking enterprise impacted more than just this one block in one neighborhood; it left a path of destruction across Kensington and throughout Philadelphia,” said U.S. Attorney Romero. “This sentence sends a clear message that, in order to halt the flow of deadly drugs into our communities, our office and our law enforcement partners are committed to investigating and prosecuting prolific drug dealers pedaling poison to those suffering from addiction.”

Carrion is a bad guy, the cops and the feds say. During the sentencing hearing, prosecutors presented evidence demonstrating Carrion’s lengthy criminal record and life of drug dealing.

“Carrion ran a drug-trafficking organization in the heart of Kensington, an area in Philadelphia that has been so adversely affected by the illicit drug trade.  His drug-trafficking activities were so nefarious that he distributed bags of heroin stamped “Funeral,” said Thomas Hodnett, Special Agent in Charge of the DEA Philadelphia Field Division. “For his conviction on multiple federal drug charges, Carrion is rightly and deservedly spending the next 20 years of his life in a federal prison cell.”

That Carrion sold drugs labeled “Funeral” does not surprise me. I recall a narcotics officer telling me that drug addicts are drawn to illegal drugs advertised as deadly, as these drugs will produce a better high – if they don’t kill you.

The takedown of a Kensington drug boss is a step in the right direction. But more needs to be done to have Kensington stop being used as a bad example for others.

Paul Davis is a Philadelphia writer who covers crime.

Labels: Broad and Liberty, crime, drugs, It's Your Funeral, Kensington