On This Day In History The Imperial Japanese Attacked Pearl Harbor 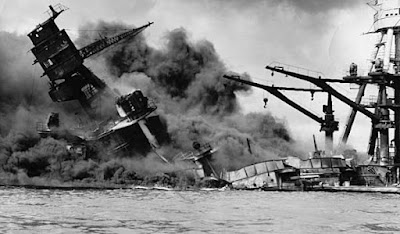 As History.com notes, on this day in 1941 the Japanese attacked Pearl Harbor.
At 7:55 a.m. Hawaii time, a Japanese dive bomber bearing the red symbol of the Rising Sun of Japan on its wings appears out of the clouds above the island of Oahu. A swarm of 360 Japanese warplanes followed, descending on the U.S. naval base at Pearl Harbor in a ferocious assault. The surprise attack struck a critical blow against the U.S. Pacific fleet and drew the United States irrevocably into World War II.
You can read the rest of the piece via the below link:
http://www.history.com/this-day-in-history/pearl-harbor-bombed
Below is a photo of my old ship, the aircraft carrier USS Kitty Hawk, circa 1970, as she passes the USS Arizona Memorial at the Pearl Harbor naval base in Hawaii: 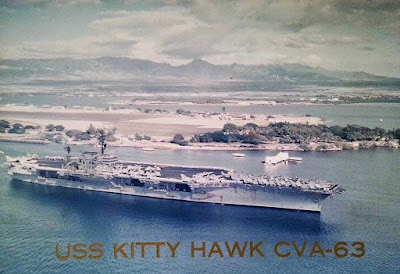 Labels: Japanese attack on Pearl Harbor, On This Day in History