The Art Of The Deal? Biden Administration Trades The Merchant of Death For Pot-Smoking Basketball Player 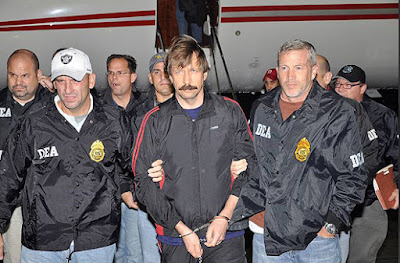 The Biden administration traded Viktor Bout, a drug and gun trafficker called "The Merchant of Death" (seen in the above photo), for Brittany Griner, a woman basketball player imprisoned on narcotic charges.

I’m thankful that Griner will be released, but was this a good trade?

Below is the DEA’s April 2012 announcement that Bout was sentenced to 25 years in prison:

DEA Administrator Michele M. Leonhart today announced that international arms dealer VIKTOR BOUT was sentenced today to 25 years in prison for conspiring to sell millions of dollars’ worth of weapons, including hundreds of surface-to-air missiles and over 20,000 AK-47s to the Fuerzas Armadas Revolucionarias de Colombia (the “FARC”), a designated foreign terrorist organization based in Colombia. BOUT understood that the weapons would be used to kill Americans in Colombia. On November 2, 2011, BOUT was convicted on all four counts for which he was charged after a three-week jury trial before U.S. District Judge Shira A. Scheindlin.


“The crimes Viktor Bout committed represent the worst-case scenario for modern law enforcement--the merger of criminal international narcotics cartels with their terrorism enablers,” Leonhart said. “But his sentencing today also reflects the best of modern international law enforcement-- sophisticated, determined, and coordinated. Thanks to the extraordinary efforts of criminal investigators and prosecutors in the United States, Thailand, Romania, Curacao and elsewhere, the ‘Merchant of Death’ has finally been held to account in a court of law for his years of profiteering from death and misery around the world.”

Manhattan U.S. Attorney Preet Bharara said: “Viktor Bout has been international arms trafficking enemy number one for many years, arming some of the most violent conflicts around the globe. He was finally brought to justice in an American court for agreeing to provide a staggering number of military grade weapons to an avowed terrorist organization committed to killing Americans. Today’s sentence is a fitting coda for this career arms trafficker of the most dangerous order.”

According to the Indictment and evidence presented at the trial:

Since the 1990s, BOUT has been an international weapons trafficker. As a result of his weapons trafficking activities in Liberia, the U.S. Office of Foreign Assets Control within the Department of Treasury placed him on the Specially Designated Nationals list in 2004. The designation prohibits any transactions between BOUT and U.S. nationals and freezes any of his assets that are within the jurisdiction of the United States.

Between November 2007 and March 2008, BOUT agreed to sell millions of dollars’ worth of weapons to the FARC, including 700-800 surface-to-air missiles (“SAMs”), over 20,000 AK-47 firearms, 10 million rounds of ammunition, five tons of C-4 plastic explosives, “ultralight” airplanes outfitted with grenade launchers, and unmanned aerial vehicles. BOUT agreed to sell the weapons to two confidential sources working with the DEA (the “CSs”), who represented that they were acquiring them for the FARC, with the specific understanding that the weapons were to be used to attack U.S. helicopters in Colombia.

During a covertly recorded meeting in Thailand on March 6, 2008, BOUT stated to the CSs that he could arrange to airdrop the arms to the FARC in Colombia and offered to sell them two cargo planes that could be used for arms deliveries. He also provided a map of South America and asked the CSs to show him American radar locations in Colombia. BOUT said that he understood that the CSs wanted the arms to use against American personnel in Colombia, and advised that, “we have the same enemy,” referring to the United States. He also stated that the FARC’s fight against the United States was also his fight and that he had been “fighting the United States…for ten to fifteen years.” During the meeting, he also offered to provide people to train the FARC in the use of the arms.

The evidence presented at trial included a recording of the March 6, 2008, meeting between BOUT, the CSs, his former associate Andrew Smulian, and others. Smulian was charged along with BOUT in March 2008 and pled guilty in July 2008. Smulian cooperated with the Government and, along with the two CSs, provided testimony at the trial.

In addition to his prison term, Judge Scheindlin sentenced BOUT to 5 years of supervised released and ordered him to forfeit $15 million.

BOUT was arrested in Thailand in March 2008 based on a Complaint filed in Manhattan federal court. He was subsequently charged in a four-count Indictment in April 2008 and extradited to the Southern District of New York in November 2010. At trial, he was convicted of (1) conspiring to kill U.S. nationals; (2) conspiring to kill U.S. officers and employees; (3) conspiring to acquire and export anti-aircraft missiles; and (4) conspiring to provide material support to a designated foreign terrorist organization.

Besides the U.S. Drug Enforcement Administration and Southern District of New York, the Royal Thai Police was instrumental in the success of the Bout case. In addition, the Romanian National Police, the Romanian Prosecutor’s Office Attached to the High Court of Cassation and Justice, the Korps Politie Curaçao of the Netherlands Antilles, and the Danish National Police Security Services assisted, as well as the U.S. Department of Justice’s Office of International Affairs.