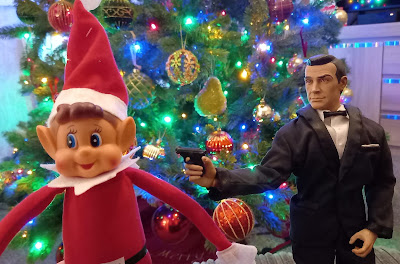 "Which lunatic asylum did they get you out of?"

I saw this amusing photo with the above caption on Facebook.

It made me laugh.

(The line about a lunatic asylum is what Sean Connery’s James Bond asked Robert Shaw’s mad killer Red Grant in From Russia With Love).

My children are grown and have their own homes, so we don’t have an Elf on the Shelf here.

But as I'm an Ian Fleming aficionado and a fan of the Bond films (especially the early ones from the 1960s, with the late, great Sean Connery as Bond), my daughter some years ago bought me the James Bond action figure from Dr. No that appears in the above photo.

The James Bond action figure is on one of my bookshelves in my book-lined basement office, along with my mementos from my Navy days and my travels.

According to the maker of the elf, “The magical Scout Elves help Santa manage his nice list by taking note of a family’s Christmas adventures and reporting back to Santa at the North Pole nightly. Each morning, the Scout Elf returns to its family and perches in a new spot, waiting for someone to spot them. Children love to wake up and race around the house looking for their Scout Elf.”

In my view, the Elf on a Shelf is a most creepy holiday traditional.

It would take James Bond, who has a license to kill, to eliminate this evil elf.