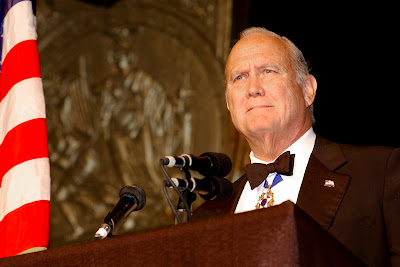 Below is an American Forces Press Service release:

Schwarzkopf was a Vietnam veteran and one of the architects of the western flanking movement that helped to defeat the Iraqi army during the Gulf War in early 1991. As the commander of U.S. Central Command, Schwarzkopf led the international coalition assembled by then-President George H.W. Bush that expelled Iraqi troops who had invaded Kuwait in August 1990.
The four-star general and West Point graduate retired in August 1991 after 35 years of Army service. Schwarzkopf died in Tampa, Fla., of complications from pneumonia, according to press reports.

"With the passing of Gen. Norman Schwarzkopf, we've lost an American original," Obama stated. "From his decorated service in Vietnam to the historic liberation of Kuwait and his leadership of United States Central Command, Gen. Schwarzkopf stood tall for the country and Army he loved. Our prayers are with the Schwarzkopf family, who tonight can know that his legacy will endure in a nation that is more secure because of his patriotic service."

"The men and women of the Department of Defense join me in mourning the loss of Gen. Norman Schwarzkopf, whose 35 years of service in uniform left an indelible imprint on the United States military and on the country," Panetta said in a statement released yesterday. "The son of a decorated Army officer, Gen. Schwarzkopf followed his father's legacy of service by enrolling in West Point in the 1950s."

"His bravery during two tours in Vietnam earned him three silver stars, and set him on the path to lead our troops into battle in Grenada, and then to take charge of the overall allied effort in the first Gulf War as Commander of United States Central Command," Panetta continued. "Gen. Schwarzkopf's skilled leadership of that campaign liberated the Kuwaiti people and produced a decisive victory for the allied coalition. In the aftermath of that war, Gen. Schwarzkopf was justly recognized as a brilliant strategist and inspiring leader."

"Today, we recall that enduring legacy and remember him as one of the great military giants of the 20th century. My thoughts and prayers are with the Schwarzkopf family in this time of sadness and grief," Panetta concluded.

Chairman of the Joint Chiefs of Staff Army Gen. Martin E. Dempsey said in a statement released yesterday that he "was saddened to learn today of the passing of General Norman Schwarzkopf, a fellow West Point graduate, former Centcom commander and one of the 20th century's finest soldiers and leaders. I join the civilian and military leaders of our country, and servicemen and women, past and present, in mourning his death."

"Gen. Schwarzkopf embodied the warrior spirit, serving with distinction in three conflicts over his 35 years of dedicated service," Dempsey said. "The hallmark of his remarkable career was the swift and decisive victory over Saddam Hussein's forces after they invaded Kuwait."

"The thoughts and prayers of the Joint Chiefs and the Joint Force are with Gen. Schwarzkopf's family and friends," he concluded.

Secretary of the Army John McHugh and Chief of Staff of the Army Gen. Raymond T. Odierno released a joint statement on Schwarzkopf's passing:

"Our nation has lost a soldier and statesman with the passing of Gen. Norman Schwarzkopf. Our prayers are with his family as we honor the memories of a man dedicated to family, his country and the many soldiers he led in war and peace. His life story touches on much of the fabric of our nation's story, ensuring his memory will remain with us for generations. Our nation owes a great debt of gratitude to Gen. Schwarzkopf and our soldiers will hold a special place in their hearts for this great leader. While much will be written in coming days of his many accomplishments, his most lasting and important legacies are the tremendous soldiers he trained and led."

Schwarzkopf is survived by his wife, Brenda, and children Cynthia, Jessica and Christian.