A Look Back At W.C. Fields On The 75th Anniversary Of His Great Film, 'The Bank Dick' 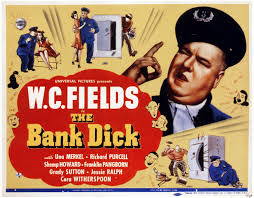 Martin Chilton at the British newspaper the Telegraph offers a look back at W.C. Fields and The Bank Dick.


W. C. Fields, a most defiantly disreputable comedian, has fallen out of the public consciousness, but the 75th anniversary of his masterpiece film The Bank Dick seems like a good time to salute one of the 20th-century's most original comic talents. Fields was doing Python-esq things long before Python, admits John Cleese.
William Claude Dukenfield has not been entirely forgotten since his grim alcoholic's death on Christmas Day in 1946, aged 66, of course. He is one of the faces on the cover of iconic album Beatles' Sgt Pepper's Lonely Hearts Club Band, and he even pops up in an episode of The Sopranos: Tony does an imitation of Fields after watching The Bank Dick. Cleese believes that Fields "had the courage and brilliance to make riskier and more profound jokes than Chaplin and Keaton”, and that's certainly true of the subversive humour of The Bank Dick.
At a time when Hollywood was offering a cloying version of family life (such as MGM's Andy Hardy movies), Fields showed the family as a festering hotbed of resentments. In the Bank Dick, written by Fields under the glorious nom de plume Mahatma Kane Jeeves, his character Egbert Sousè is at war with his wife, daughter and mother-in-law. With Fields, there is usually a subtle malice in play about family life, masked by mock affection: "Did you warble my little wren?" he says to his grim-faced wife Agatha. His status-minded wife insists that Sousè "is pronounced Sou-sè. Accent grave over the ‘e’”.
You can read the rest of the piece via the below link:

http://www.telegraph.co.uk/comedy/comedians/wc-fields-a-master-of-comedy/
Posted by Paul Davis at 11:26 AM