Chairman Of The Joint Chiefs Thanks Veterans for Their Service to Communities, Nation 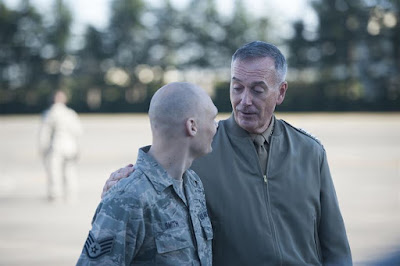 World War I, the “war to end all wars,” claimed more than 17 million lives and left more than 20 million wounded. It was a cataclysm that claimed a generation.
In the following years, nations celebrated the day when the guns finally fell silent as Armistice Day.
But, sadly, World War I begat World War II and wars have continued to the present day. And Armistice Day became Veterans Day.
“Each year, on November 11th we honor all the men and women who have served our country in uniform,” Marine Corps Gen. Joseph F. Dunford Jr., the chairman of the Joint Chiefs of Staff, said in a video message to the force to commemorate Veterans Day.
Veterans Day recognizes the contribution that veterans have made throughout American history. There are 21.5 million veterans in America now.
It’s a day “to reflect on their dedication and sacrifice, and that of their families and to reaffirm our commitment to keep faith with those who’ve served,” the chairman said. “More importantly, it gives us an opportunity to say, ‘Thanks.’”
But the general’s appreciation for veterans isn’t limited to their military service. Veterans also serve their communities and states. They are the volunteer fire fighters and baseball coaches. Veterans return home to teach, to open new businesses and to work in hospitals.


“To all veterans, I want thank you for your service – not just for your time in uniform, but also for the leadership you are providing in your communities every day,” Dunford said. “You continue to make a difference across our nation and I couldn’t be more proud.”
Posted by Paul Davis at 11:14 AM