‘Disciples: The World War II Missions Of The CIA Directors Who Fought For Wild Bill Donovan 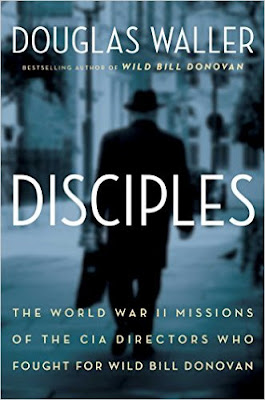 James Srodes offers a review in the Washington Times of Douglas Waller's Disciples: The World War II Missions of the CIA Directors Who Fought for Wild Bill Donovan.


This book will make a dandy holiday gift for the spy story buff who eats up yarns about the dark side of the world of intelligence and those masters of intrigue who exist inside the web.
This is an authoritatively researched and smoothly written tale of four future directors of the Central Intelligence Agency who began their careers in America’s World War II covert action service, the Office of Special Services (OSS) headed by the charismatic Gen. William “Wild Bill” Donovan.
The four profiles of Allen Dulles, Richard Helms, William Colby and William Casey are linked by their ties to Donovan, but their lives also intersected with each other. This presents author Douglas Waller with the tricky task of telling their stories while keeping Donovan in the foreground even after he had been set down as the nation’s spymaster by President Harry Truman 90 days after Japan’s surrender.
Mr. Waller carries it off, however. A former Washington correspondent for both Time and Newsweek magazines, he is a seasoned reporter of the intelligence scene and the author of a respected 2012 biography of Donovan and, in 2004, of Gen. Billy Mitchell. None of these profiles is the last word on Donovan or the four disciples, as Mr. Waller calls them. There are biographies galore of all of them and the four were prolific writers themselves. But as an entertaining read for the armchair spymaster it is a good primer about the OSS and the controversy over whether it really made much difference in the outcome of the war.
You can read the rest of the review via the below link: