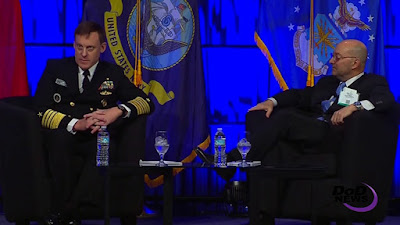 WASHINGTON, Feb. 24, 2017 — Navy Adm. Mike Rogers, the chief of U.S. Cyber Command, discussed the command’s future over the next five to 10 years yesterday at West 2017, a sea services event in San Diego co-sponsored by AFCEA International and the U.S. Naval Institute.

AFCEA is the international information technology, communications and electronics association for professionals in government, industry and academia.

Rogers, also director of the National Security Agency, fielded questions from moderator retired Navy Adm. James G. Stavridis, who’s now dean of the Fletcher School of Law and Diplomacy at Tufts University. He’s also chairman of the board of the U.S. Naval Institute and a senior fellow at the Johns Hopkins University Applied Physics Laboratory.

Topics included integrating cyber at the tactical level of warfare, modeling Cybercom after the structure used by the Special Operations Command, the Cybercom workforce, and the relationship between Cybercom and the private sector, all in the five-to 10-year horizon.

“Here's what we need to build toward -- in the immediate near term, elevating Cyber Command to a combatant command,” Rogers said, adding, “I think the potential for that happening in the near term is high.”

Cybercom today is a component of U.S. Strategic Command. 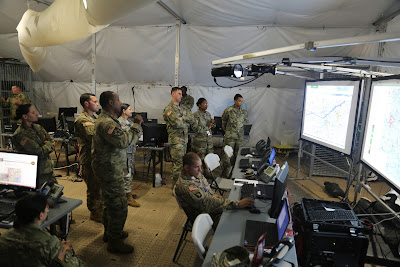 Over the next five to 10 years the admiral said he would like to see cyber integrated offensively and defensively “down to the operational tactical level.”

Offensive cyber in some ways is treated like nuclear weapons, he added, “in the sense that their application outside a defined area of hostilities is controlled at the chief-executive level and is not delegated down.”

Rogers said he hopes that over the next five to 10 years Cybercom can engender enough confidence in decision makers and policymakers that they feel comfortable pushing offensive cyber activities to the tactical level.

“We should be integrating [cyber] into the strike group and on the amphibious expeditionary side. We should view this as another toolkit that's available … as a commander is coming up with a broad schema of maneuver to achieve a desired outcome or end state. That’s what I hope,” the admiral said.

Rogers and Stavridis likened the journey of cyber to that of special forces, whose members in earlier times were called in only for special occasions and their use was highly controlled. Today, they said, combatant commanders have component commands from each service and from special operations.

“I would create Cyber Command much in the image of [U.S. Special Operations Command],” Rogers said. “Give it that broad set of responsibilities where it not only is taking forces fielded by the services and employing them; it's articulating the requirement and the vision and you're giving it the resources to create the capacity and then employ it.”

SOF also provides a theater special operations commander across all nine combatant commands, said Rogers, adding, -- that’s “a model I think we should drive to.”

On the military side, the Cybercom leadership is finding that what motivates a young man or woman to be a Marine Corps rifleman, to work the flightline in the Air Force or to be a deck seaman in the Navy also motivates cyber warriors.

They want to be part of something bigger than themselves, they like the ethos and culture of the military, he said.

“That's a real selling point for us right now,” the admiral said. “The self-image of this workforce is that they are the digital warriors of the 21st century. The way they look at themselves -- we're in the future, we're the cutting edge, we're doing something new, we're blazing a path.”

As a leader, Rogers said, “you cannot underestimate the value of that.”

Rogers says he reminds recruits that as cyber warriors they’ll be able to do things in uniform, within the defense and Law of Armed Conflict application, that they can’t do anywhere else, and they’ll gain responsibility as they show proficiency in the job.

“Everybody responds well to that,” he said. “Retention is good right now.”

In its work with the private sector over the next five to 10 years, Rogers said he would like to see Cybercom and tech companies “get to a level of integration where we have actual physical collocation with each other.”

The admiral says that in his military experience, “when we create [command-and-control] structures, when we create analytic and command-and-control nodes … we try to bring all together as much data, as many different perspectives and as many different elements in the broad enterprise that are necessary to achieve the outcome. I think we need to do the same thing” with the tech sector.

Rogers said he’d like to see Cybercom, for one thing, take advantage of the sector constructs that are in place for the 16 segments in private industry that Presidential Policy Directive 21 designates as infrastructure critical to the nation.

“How do we take advantage of that and integrate at that level? Because as an execution guy, my experience teaches me that you want to train, you want to exercise, you want to simulate as many conditions as you can before you actually come into contact with an opponent,” Rogers said.

Help from the Tech Sector

On the cyber defense side, the admiral said, he’d like help from the technology sector to get to machine learning at speed and automation, and through this technology to help Cybercom free-up human capital. He’d also like the sector’s help with human capital development.

“People love to talk about the technology, but our greatest edge isn't technology; our greatest edge is that motivated man or woman with the intellectual capacity to anticipate, to be innovative and to be agile,” Rogers said. “Because ... what we’re dealing with is driven by a man or woman somewhere in the world sitting at a keyboard. There's a human dimension in all of this. It's not just about the machine.”

On the offensive side -- speaking for himself rather than the department, he said -- there are things Rogers is trying to come to grips with.

“In the application of kinetic functionality -- weapons -- we go to the private sector and say, ‘Build this thing we call a [joint directed-attack munition], a [Tomahawk land-attack munition].’ Fill in the blank,” he said.

“On the offensive side, to date, we have done almost all of our weapons development internally,” Rogers said. “And part of me goes -- five to 10 years from now is that a long-term sustainable model? Does that enable you to access fully the capabilities resident in the private sector? I'm still trying to work my way through that, intellectually.”

Note: You can click on the above DoD photos to enlarge.
Posted by Paul Davis at 1:11 PM