Line Handling Aboard The USS Bonhomme Richard in Sasebo, Japan 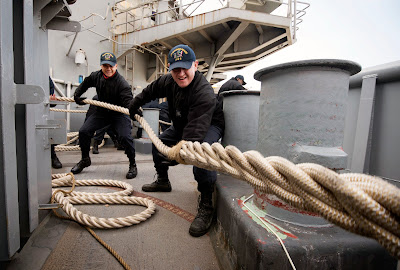 The U.S. Navy released the above photo and below caption:

Bonhomme Richard is on a routine patrol, operating in the Indo-Asia-Pacific region to serve as a forward-capability for any type of contingency.

The above photo was taken by Mass Communication Specialist 2nd Class Diana Quinlan.

Note: The photo brings back memories. I visited Sasebo, Japan in 1971 when the USS Kitty Hawk pulled in for R&R during our WESTPAC Vietnam cruise. I later did my share of line handling while serving aboard the harbor tugboat USS Saugus at the nuclear submarine base at Holy Loch, Scotland.