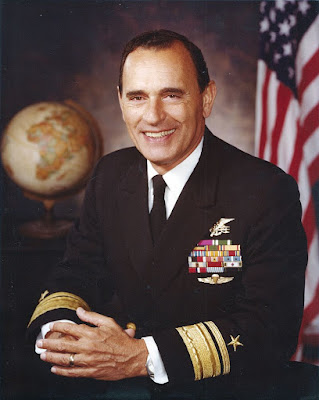 The Navy Times reports that Admiral Richard Lyon dies at 93.

SAN DIEGO — Richard Lyon, the first Navy SEAL to rise to the rank of admiral, has died at 93.

Lyon served four decades in the Navy, including World War II and the Korean War, and was among the first U.S. troops to enter Japan after the atomic bomb was dropped. He went on to work as a Scout intelligence officer in northern China and later served in Korea.

Rear Adm. Tim Szymanski, commander of the Naval Special Warfare Command, called Lyon a legend who was honored with the title "Bullfrog" for being the oldest-serving SEAL. Lyon regularly attended the graduation ceremonies of SEALs.

... Lyon died Friday surrounded by family and friends at his beachfront home in Oceanside, north of San Diego, said lifelong friend Kelly Sarber, who met Lyon as a child because her father was also a SEAL.

Sarber recalled photos of Lyon and other SEALs swimming with knives during the elite military team's beginnings.

"He reminded me of James Bond," she said. "I never saw him lose his cool. I never saw him be nothing but kind and treat people with manners. He was a real class act."