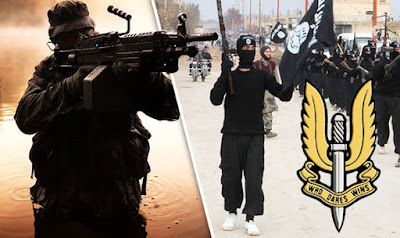 Ross Logan at the British newspaper the Express offers a piece on a fierce fight between the SAS and the terrorists.

One British fighter drowned a jihadist in a puddle, while another killed three extremists by beating them to death with the butt of his rifle.

Almost every member of the elite unit returned to operations two days after their miracle escape, a source told the Daily Star.

The team were reportedly ambushed by the ISIS fighters as they completed an intelligence gathering operation close to Mosul, northern Iraq.

After a four hour gun battle with the terror cell, in which roughly 20 ISIS fighters were said to have been killed, the SAS team were trapped by a river bed with then 10 bullets left between them.

http://www.express.co.uk/news/world/823792/SAS-kill-ISIS-Mosul-drown-soldier-puddle-incredible-escape-Iraq
Posted by Paul Davis at 10:48 AM