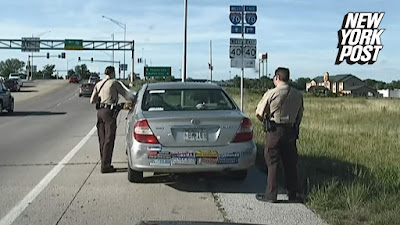 As a writer and columnist for nearly 25 years, I’m dismayed by biased and erroneous news coverage, called “fake news” by President Trump and simply poor journalism by others.

Journalistic standards, ethics and fairness too often go by the wayside when an opinionated journalist wants to score a political point.

Even though a columnist, unlike a straight reporter, can offer opinion and analysis, he too is required to adhere to journalism ethics and standards. He should not embellish or outright lie, as was the case reported by Joshua Rhett Miller at the New York Post.

A sheriff in Missouri is firing back at a now-suspended newspaper columnist who claimed to experience what “minority motorists” must feel when getting pulled over by cops, saying he was lucky he didn’t “get shot” during a recent traffic stop.

Boone County Sheriff Dwayne Carey has refuted a June 30 opinion column by longtime Columbia Daily Tribune columnist Bill Clark, who was stopped 10 days earlier for failing to use his turn signal. Clark, an 84-year-old white man, suggested in the column that he might’ve been pulled over because of his “liberal bumper stickers,” an obvious sign of an “aging hippie with a weed habit,” he claimed.

…But a review of dashcam video told a different story, according to Carey, who contacted the newspaper’s managing editor, Charles Westmoreland, to disagree with Clark’s version of events. Carey also released the 11-minute video and penned an 1,800-word response to Clark’s column, blasting it as “sensationalism” and disputed the claims of “arrogance” on behalf of the deputies.

“In his column he indicates, ‘I’m lucky I didn’t get shot,’” Carey wrote. “There is never a weapon drawn, the deputies don’t take a position of cover, there are no loud verbal commands, no panic or anything else for that matter by the deputies. Would you agree this is sensationalism at its best? I say yes!”

You can read the rest of the piece and view the dashcam video via the below link:

http://nypost.com/2017/07/07/sheriff-blasts-columnists-sensational-account-of-traffic-stop/
Note: The columnist was suspended quite rightly by his editor. Thankfully, the police recorded the traffic stop. I believe that all police officers should have body cams for the public and their own protection. And one should not condemn all journalists for the biased and erroneous news reporting of some reporters and news organizations.
Posted by Paul Davis at 2:49 PM