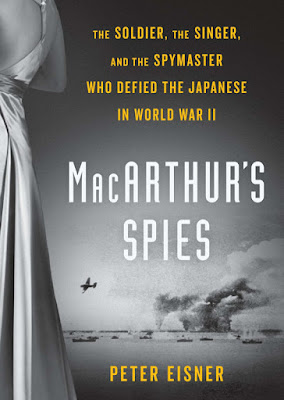 The Washington Times published my review of Peter Eisner's MacArthur's Spies: The Soldier, The Singer, and the Spymaster Who Defied the Japanese in World War II.


The Bataan Death March in the Philippines in World War II that was orchestrated by the occupying Imperial Japanese Army is well documented.

The forced march of Americans and Filipinos who surrendered to the Japanese caused the death of thousands. The prisoners were denied proper food and water and stragglers were shot or bayoneted to death. Those who survived the death march were placed in military camps under inhuman conditions.

In Australia, Gen. Douglas MacArthur announced that he had been ordered by President Roosevelt to break through the Japanese blockade of the Philippines and travel to Australia in order to mount a campaign against the Japanese.

“I came through,” the general famously told the crowd that greeted him. “And I shall return.”

But before he was able to return triumphantly to the Philippines, the general required intelligence and an organized resistance to the Japanese occupiers.

Not as well known as the Bataan Death March and Gen. MacArthur’s departure and return to the Philippines, is the story of the Americans and Filipinos who refused to surrender to the Japanese and headed to the hills to form guerrilla bands. These guerrillas and intelligence operatives defied the Japanese and performed acts of sabotage and espionage. Despite the brutal efforts of the Japanese army and the dreaded Kempeitai, the Gestapo-like Japanese military police, they were able to provide crucial intelligence to Gen. MacArthur. These brave and resourceful men and women played an important role in the war.

In Peter Eisner’s “MacArthur’s Spies: The Soldier, the Singer and the Spymaster Who Defied the Japanese in World War II” we learn about the guerrillas and spies, with an emphasis on three of them.