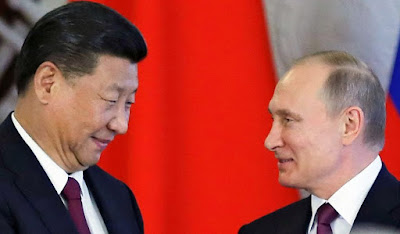 Russia and China are working against the United States around the world, according to a Defense Intelligence Agency (DIA) report.

“Moscow and Beijing share a common interest in weakening U.S. global influence and are actively cooperating in that regard,” the DIA’s first annual report on Russian military power says.

The military intelligence agency stated in the report made public last month that defense cooperation between Russia and China is slowly expanding along with economic ties. Russian officials, according to the report, frequently praise Russia’s ties with China, and Russian President Vladimir Putin has said the Beijing-Moscow ties are the closest in a decade.

“In fact, the Russian National Security Strategy lists developing a strategic partnership with China as one of Russia’s most important goals,” the report said.

... The report did not provide details of the growing military ties. But a separate report published in March by the congressional U.S.-China Economic and Security Review Commission reveals that the closer ties include increasingly complex Russia-China military exercises and sales of advanced weapons. That report warns that the joint cooperation has important strategic implications for American security interests in Asia.

http://www.washingtontimes.com/news/2017/jul/12/inside-the-ring-russia-china-undermining-us/
Posted by Paul Davis at 2:41 AM