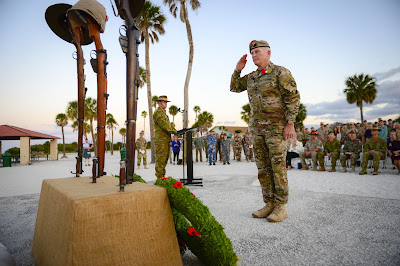 WASHINGTON, July 22, 2017 — Special operations forces are relevant to most operations the U.S. military is involved with and are a good return on the investment, the commander of U.S. Special Operations Command said at the Aspen Security Forum in Colorado yesterday.

Fox News reporter Catherine Herridge interviewed Army Gen. Raymond A. Thomas III for the forum and he used the occasion to debunk some myths about the command, which is based at MacDill Air Force Base, Florida.

“We are not the world’s cop, we are not a panacea, we don’t do anything by ourselves and we aren’t doing things that aren’t highly supervised, there is no off the reservation activities,” Thomas said.

But special operations forces have been at the heart of most operations against violent extremism, he said, and have been key to turning the tide against the Islamic State of Iraq and Syria and al-Qaida wherever these groups raise the ugly heads.

“We are relevant to most if not all the national security challenges,” the general said.

The question he gets most often -- and Herridge asked a version of it -- is whether special operations forces are being overused or overextended? “We are actively trying to work our way out of a job, whether that be in Afghanistan or against ISIS,” he said.

Not the Time to Relax

Thomas stressed that the force is having successes, but now is not the time to let up on the pressure being placed on enemy forces. He said the lesson from the Osama bin Laden operation in 2011 was, as good as it was to kill the al-Qaida leader, “if you don’t dismantle the whole network -- if you don’t address the ideology -- you’ve just killed one guy.”

The territory that ISIS controls is shrinking by the day and Syrian Democratic Forces are closing on Raqqa, the so-called capital of the ISIS caliphate. Thomas said he does not know if ISIS leader Abu Bakr al-Baghdadi is alive, but if he is not dead “there is not a safe place for him on this Earth. We absolutely dismantled his network; everyone who worked for him initially is dead or gone. Everyone who stepped to the plate following [him] -- dead or gone. Down through a network where we have killed, at a conservative estimate, 60,000 of his followers -- his army.”

Baghdadi declared the caliphate and placed his army on the battlefield “and we went to war with it,” the general said.

Mosul has been liberated, but it is still “dicey” in the old city, he said. There are still pockets of ISIS fighters in Tal Afar and in western Iraq. “We are pursuing these people as hard as we can to affect the physical aspect of the caliphate while we deal with the harder part -- the ideological basis of it,” he said.

Socom is the DoD coordinating authority for transregional terrorism and has been for going on two years, the general said. “This was a role and process that didn’t exist,” he said. “It tied together our disparate DoD efforts.”

Previously, Army Gen. Joe Votel would handle special operations in the Central Command region, and Marine Corps Gen. Thomas Waldhauser would handle Africa Command and Navy Adm. Harry Harris would handle Pacific Command. “They were good, focused activities but without any synchronization at the DoD level,” Thomas said. “We were thrust into that role.”

He said he is not sitting at MacDill moving special operators around the globe, but the change enables the command “to agitate or drive an assessment at the senior DoD level of what are we trying to do, how well are we doing it, and what do we need to change in terms of strategy and resourcing.”

Previously, the only person in the department who could do such a thing was the defense secretary.

He said his mission objectives from Defense Secretary Jim Mattis have changed. “It used to be 'Defeat ISIS,'” he said. “It is now, 'Annihilate ISIS.' [Mattis] put a non-doctrinal term out there to amp up the volume a bit, and we all got the message.”

Thomas wants Socom to be more agile and more networked.

He said the command has its eyes on Iran and its stated goal of building a Shia crescent through Iraq and Syria into Lebanon. Iranian officials are all throughout that area now, the general said, adding that they bear special attention.

ISIS is trying to export its “brand” through the world and they seized on Libya as a failed state, which, with its gap in governance could serve as a foothold in the region. In fact, ISIS leaders declared Libya a province in the caliphate, he said, and at its high-water mark in the country had around 2,000 fighters in and around the seaside city of Sirte. “They don’t exist anymore,” Thomas noted.

Special operations forces worked through proxies and surrogates to eliminate the ISIS threat in that area, he said. Still, the general said, Libya is another place that bears watching as some of the fighters escaped to southern Libya and are looking for a time and place to return.

The command is also invested in deterring Russia and there are special operators working with all the nations bordering Russia, Thomas said. “The people [of those nations] enjoy their freedom and want to keep it,” he added. 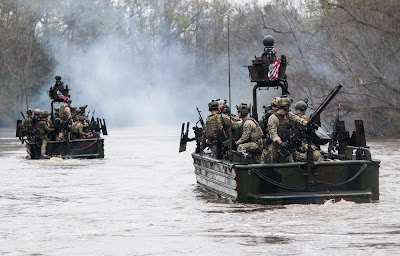 Herridge asked about the command’s work on the Korean Peninsula. Thomas objected to the argument that there is no military option against North Korean leader Kim Jong Un as he continues to build a nuclear weapons and the means to deliver them. “There is always a military option,” he said. “That’s why you pay $600 billion a year. It is an ugly, ugly option, but you cannot play elements of power and then discount that there is no option."

“People say that Kim Jong Un can only put a warhead the size of the Hiroshima bomb on a missile,” he continued. “That’s not comforting to me. Everything I am hearing … is that he and the regime are inextricably tied to their nuclear program.”

For the future, the general wants Socom to be able to give decision-makers more options to choose from when a crisis develops. “My biggest concern is the need to transform,” Thomas said.

The general spoke of a senior private industry executive who visited the command and told him that though the command is getting the right people and prototyping new capabilities well, “you suck at deep learning.”

“We are still trying to digest terabytes of data, and this company is way beyond that,” Thomas said. “If we can master that, we become Socom on steroids in terms of Seeing threats, seeing opportunities [and] applying our special capabilities.”

In the above U.S. Navy photo taken by Seaman Richard Miller  Army Lt. Gen. Raymond A. Thomas III, commander of, Joint Special Operations Command, participates in a riverine demonstration with members of Special Boat Team 22 at the Naval Small Craft Instruction and Technical Training School in Mississippi on March 12, 2015.
Posted by Paul Davis at 1:54 PM