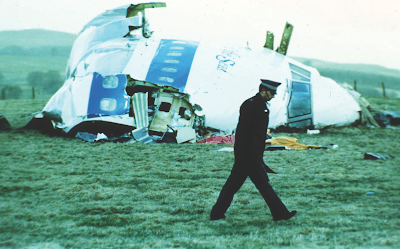 The FBI offers a piece on the bombing of Pan Am Flight  103.

Most Americans were awakened to the reality of terrorism on September 11, 2001, but more than a decade earlier, a few days before Christmas in 1988, Pan Am Flight 103, bound to New York from London and carrying mainly U.S. citizens, was blown out of the sky by a terrorist bomb over the small Scottish town of Lockerbie.
In all, 270 souls perished. On board the aircraft were citizens of 21 countries, including 189 Americans. On the ground, 11 residents of Lockerbie were killed when the plane’s burning wings plunged into a quiet neighborhood just after dinner. Mothers and fathers, grandparents, children as young as 2 months old, and college students returning home from a study abroad program lost their lives in what was the largest terrorist attack in American history until 9/11.
The bombing, believed to be carried out by Libyan intelligence officers in retaliation for U.S. actions against then-Libyan dictator Muammar Gaddafi, was a transformative event for the FBI, one that changed the way the Bureau investigates terrorism and assists victims of crimes.
You can read the rest of the piece and view photos and videos via the below link:
https://www.fbi.gov/news/stories/remembering-pan-am-flight-103-30-years-later-121418?utm_medium=email&utm_source=fbi-top-stories
Posted by Paul Davis at 4:56 AM