Inside Europe's Most Powerful Mafia -- The 'Ndrangheta 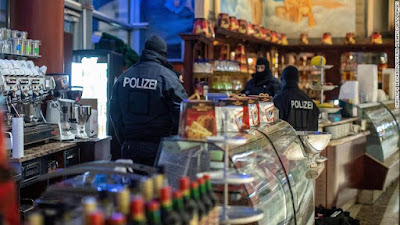 Tim Lister at cnn.com offers a piece on the ‘Ndrangheta, seen as the most powerful organized crime group in Europe.
(CNN) Back in 2010, Domenico Oppedisano was often seen taking his fruit to market in the town of Rosarno in southern Italy, chugging around in his three-wheeled van. But the 80-year old had another job: he was 'chairman of the board' of Italy's most powerful mafia group -- the 'Ndrangheta.
This week, police in four European countries carried out raids on the ‘Ndrangheta’s sprawling empire of money-laundering and drug-trafficking, arresting 90 people. They described "Operation Pollino" -- two years in the making - as a "decisive strike against one of the most powerful Italian criminal networks in the world."


The operation took place the day after the alleged head, or "godfather," of the Sicilian mafia, known as Cosa Nostra, was arrested with 46 other people in the Palermo region of Italy on mafia charges.


But Oppedisano, now in jail after being arrested eight years ago, may not be impressed. The 'Ndrangheta has been the target of raids and even US Treasury sanctions for well over a decade. And yet it has entrenched its dominance of the cocaine trade, forging links with organized crime groups in Latin America, New York, Turkey and Albania.


Mafia watchers estimate its turnover is probably in the range of about $60 billion a year -- similar to the GDP of Croatia or Bulgaria. And it may control as much as 80% of the cocaine entering Europe.