My Washington Times Review Of The James Bond Continuation Novel, 'Forever And A Day' 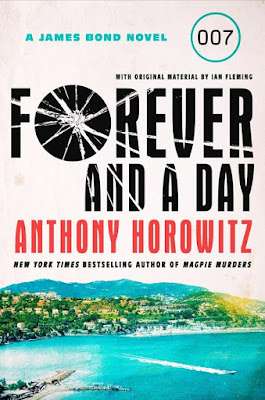 
I’m not fond of continuation novels, as some writers, like Raymond Chandler, Ian Fleming and Sir Arthur Conan Doyle, have a unique style that truly can’t be imitated. But I understand that the authors' iconic characters, Philip Marlowe, James Bond and Sherlock Holmes, are so popular that their many loyal readers want to read more about them, just as they enjoy watching the characters portrayed on TV and on film.


The late Kingsley Amis, author of “Lucky Jim,” wrote the James Bond continuation novel “Colonel Sun” in 1968. Mr. Amis was an admirer of Ian Fleming and he wrote of the “Fleming Effect,” which he called the fusion of a vivid imagination with an air of authority that swiftly carries the reader along on fantastic stories that Ian Fleming himself called “improbable but not impossible.”


I don’t believe Mr. Horowitz captured the Fleming Effect, but he comes close.


I was weaned on Ian Fleming as a preteen and teenager. I devoured his novels about the British secret agent with the license to kill. I loved Mr. Fleming’s description of exotic places, people and products. I also loved his unforgettable characters, such as villains like Goldfinger and Blofeld, women like Domino and Honeychile, and James Bond’s friends, like Felix Leiter and Darko Kerim. James Bond fought the good fight against Soviet killers, international criminals and malicious madmen. Ian Fleming’s novels are far darker and much more complicated than the films and I’ve reread the thrillers a good number of times over the years.


… Mr. Horowitz penned an earlier James Bond continuation novel called “Trigger Mortis.” Like that novel, “Forever and a Day” was commissioned by the Ian Fleming estate and contains original material from the late Mr. Fleming. Utilizing his ideas and unpublished story notes is a good idea and a good hook.


A portion of “Forever and a Day” is based on an outline Ian Fleming wrote for an American TV series that never came to be. I wish that he had expanded more on the outline, but most of the novel is an original story crafted by Mr. Horowitz.


In this novel, which takes place in the 1950s in a prequel to Ian Fleming’s “Casino Royale,” 007 is killed right off. No, not James Bond. The man killed is the holder of the 007 code name that James Bond takes on as he is ordered to investigate the murder of the previous 007 in Marseille, France.

https://www.washingtontimes.com/news/2018/dec/13/book-review-forever-and-a-day-by-anthony-horowitz/
Posted by Paul Davis at 12:13 AM