My Washington Times Review Of 'In the Hurricane's Eye: The Genius Of George Washington And The Victory At Yorktown' 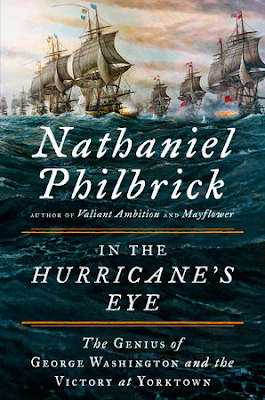 The Washington Times published my review of Nathaniel Philbrick’s In The Hurricane’s Eye: The Genius of George Washington and the Victory at Yorktown.


When most people think of the American Revolution, they generally envision the historic land battles of Bunker Hill, Lexington and Yorktown. If one thinks of the war’s naval conflicts, it is perhaps only the sea battles of John Paul Jones that come immediately to mind.


But in historian Nathaniel Philbrick’s outstanding book, “In the Hurricane’s Eye: The Genius of George Washington and the Victory of Yorktown,” he describes vividly the Battle of the Chesapeake, a sea battle devised by Gen. Washington but fought entirely by the French, that occurred prior to the definitive win at Yorktown.


Mr. Philbrick explains that when France entered the war in 1778, Washington hoped that his new ally would break the British navy’s hold on the Atlantic seaboard. But for two-and-a-half years, the French failed to contain the British navy.


In December 1780, Sir Henry Clinton, the British commander, sent Benedict Arnold, his newest brigadier general, to Virginia. Washington ordered the Marquis de Lafayette to pursue the despised American traitor. Nine months later, after several battles between the Americans and the British, British Gen. Charles Cornwallis was trapped at Yorktown by the French fleet that had arrived from the Caribbean.


Up to the summer of 1781, Washington found that coordinating his army’s movement with a French fleet 2,000 miles away was impossible, but then, as Mr. Philbrick states, the impossible happened.


“The Battle of Chesapeake has been called the most important naval engagement in the history of the world,” Mr. Philbrick writes. “Fought outside the entrance of the bay between the French admiral Comte de Grasse’s twenty-four ships of the line and a slightly smaller British fleet commanded by Rear Admiral Thomas Graves, the battle inflicted severe enough damage on the Empire’s ships that Graves returned to New York for repairs. By preventing the rescue of seven thousand British and German soldiers under the command of General Cornwallis, de Grasse’s victory on Sept. 5, 1781, made Washington’s subsequent triumph at Yorktown a fait accompli. Peace would not be officially declared for another two years, but that does not change the fact that a naval battle fought between the French and the British was largely responsible for the independence of the United States.”