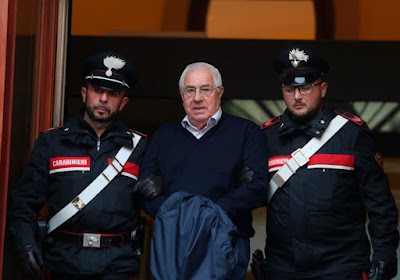 The New York Post offers a piece on the arrest of the new Sicilian Cosa Nostra crime boss.
The presumed new boss of the Cosa Nostra was arrested together with 45 other top mobsters, Italian authorities said Tuesday, striking a massive blow to the resurgent Sicilian Mafia.
Settimo Mineo, 80, is believed to have taken over the leadership of the Sicilian Mafia after the death of the “boss of bosses” Salvatore “Toto” Riina, aka “The Beast.”
Authorities said they dismantled the upper ranks of the mafia that in recent years made a comeback and regained some of its lost prominence that peaked in the 1990s.
Interior Minister Matteo Salvini said the raid was an “extraordinary operation” in the Sicilian capital, Palermo.
You can read the rest of the piece via the below link: